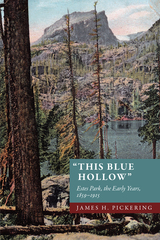 BUY
This Blue Hollow: Estes Park, the Early Years, 1859-1915
by James H. Pickering
University Press of Colorado, 2005
eISBN: 978-1-60732-118-7
Paper: 978-0-87081-801-1
This Blue Hollow is the first comprehensive account of the early history of Estes Park, Colorado, the "gem of the Rockies." In this enthralling narrative, James H. Pickering traces the development of Estes Park as a mountain resort community, from the time of its first recorded discovery by Joel Estes in 1859 to the establishment of Rocky Mountain National Park in 1915. Though Estes and his family stayed only briefly, others quickly followed: hunters, homesteading settlers, lumbermen, mountaineers, artists, writers, and vacationers. They came for many reasons: first for settlement, exploration, and exploitation and later for escape, health, recreation, and renewal. Their collective experiences and accomplishments-their successes as well as their failures-are chronicled in this book.

Based on Pickering's extensive use of primary sources, This Blue Hollow details the lives of such characters as Joel Estes and Griffith J. Evans, the valley's first residents; the "notorious" James Nugent ("Rocky Mountain Jim") and his short but tempestuous relationship with the celebrated English traveler Isabella Lucy Bird; and the Earl of Dunraven, a wealthy Irishman who was successful in his (illegal) attempt to secure control of as much of the park as possible for his own uses. The book also explores such significant events as the coming of the first pioneer families and permanent settlers, as well as their development of Estes Park as a place to farm, ranch, and entertain tourists; the conquest of Longs Peak and the first explorations of other high and remote places; and the people and circumstances that led to the establishment of the town of Estes Park in 1905 and Rocky Mountain National Park a decade later.

AUTHOR BIOGRAPHY
James H. Pickering, a summer resident of Estes Park, is a professor of English at the University of Houston, where he has also served as dean, provost, and president. He has written or edited seventeen books on nineteenth- and early twentieth- century Colorado history.
REQUEST ACCESSIBLE FILE