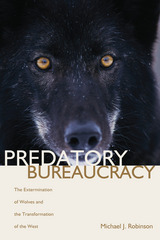 Predatory Bureaucracy is the definitive history of America's wolves and our policies toward predators. Tracking wolves from the days of the conquistadors to the present, author Michael Robinson shows that their story merges with that of the U.S. Bureau of Biological Survey. This federal agency was chartered to research insects and birds but - because of various pressures - morphed into a political powerhouse dedicated to killing wolves and other wildlife.

Robinson follows wolves' successful adaptation to the arrival of explorers, mountain men, and bounty hunters, through their disastrous century-long entanglement with the federal government. He shares the parallel story of the Biological Survey's rise, detailing the personal, social, geographic, and political forces that allowed it to thrive despite opposition from hunters, animal lovers, scientists, environmentalists, and presidents.

Federal predator control nearly eliminated wolves throughout the United States and Mexico and radically changed American lands and wildlife populations. It undercut the livelihoods of countless homestead families in order to benefit an emerging western elite of livestock owners. The extermination of predators led to problems associated with prey overpopulation, but, as Robinson reveals, extermination and control programs still continue. Predatory Bureaucracy will fascinate readers interested in wildlife, ecosystems, agriculture, and environmental politics.

AUTHOR BIOGRAPHY
Michael J. Robinson is carnivore conservation coordinator for the Center for Biological Diversity. He lives in New Mexico.
TABLE OF CONTENTS