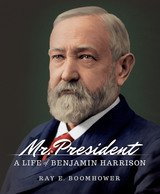 Mr. President: A Life of Benjamin Harrison, the thirteenth volume in the Indiana Historical Society Press’s youth biography series, examines Harrison’s rise to political prominence after his service as a Union army general during the Civil War.
Although he served only one term, defeated for re-election by Cleveland in 1892, Harrison had some impressive achievements during his four years in the White House. His administration worked to have Congress pass the Sherman Antitrust Act to limit business monopolies, fought to protect voting rights for African American citizens in the South, preserved millions of acres for forest reserves and national parks, modernized the American navy, and negotiated several successful trade agreements with other countries in the Western Hemisphere.
After losing the White House, Harrison returned to Indianapolis, once again becoming one of the city’s leading citizens. He died from pneumonia on March 13, 1901, in his home on North Delaware Street, today open to the public as the Benjamin Harrison Presidential Site.
AUTHOR BIOGRAPHY
Ray E. Boomhower is senior editor at the Indiana Historical Society Press, where he had edited the Society’s quarterly popular history magazine Traces of Indiana and Midwestern History since 1999. A native of Mishawaka, Indiana, Boomhower graduated from Indiana University in 1982 with degrees in journalism and political science. He received his master’s degree in U.S. history from Indiana University, Indianapolis, in 1995. Before joining the Society staff, he worked in public relations for the Indiana State Museum and as a reporter for two Indiana daily newspapers, the Rensselaer Republican and the Anderson Herald.
The author of numerous articles for Traces and the Indiana Magazine of History, Boomhower has also written biographies of such notable Hoosiers as Ernie Pyle, Gus Grissom, Lew Wallace, Juliet Strauss, May Wright Sewall, Jim Jontz, and John Bartlow Martin. In 1998 Boomhower received the HIS’s Hoosier Historian award and in 2010 he was named winner of the Regional Author Award in the annual Eugene and Marilyn Glick Indiana Authors Awards.