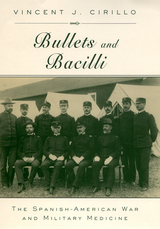 For each soldier killed in combat during the Spanish-American War, more than seven died from diseases such as typhoid fever and malaria - a rate higher than that of the Civil War. During a time of rapid medical innovation and discovery, why did these soldiers die so needlessly? This work focuses primarily on military medicine during this conflict. Historian Vincent J. Cirillo argues that there is a universal element of military culture that stifles medical progress. This war gave army medical officers an opportunity to introduce to the battlefield new medical technology, including the X-ray, aseptic surgery and sanitary systems derived from the germ theory. With few exceptions, however, their recommendations were ignored almost completely. Scientific knowledge was not sufficient; putting these ideas into military practice required the co-peration of line officers and volunteer soldiers as well as a restructuring of military education. The influence of military experiences on the history of American medicine is often overlooked. Cirillo shows how preventable deaths during the Spanish-American War led to reforms that continue to save the lives of both soldiers and civilians to the present day.
AUTHOR BIOGRAPHY
VINCENT J. CIRILLO, past president of the Medical History Society of New Jersey, is an independent scholar.
REVIEWS
"Confronting a crisis: How LI united to fight an epidemic in 1898" by John Hanc
https://www.newsday.com/long-island/camp-wikoff-in-montauk-long-island-united-to-fight-an-epidemic-in-1898-1.43562996
— Newsday