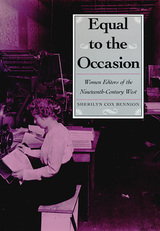 Bennion provides in-depth portraits of nineteenth-century women editors of the West and their diverse publications. The book's title takes its name from an 1898 editorial in the Wasatch Wave which described Piute Pioneer editor Candace Alice De Witt as a "maiden fair, fully equal to the occasion."Equal to the Occasion delves into the lives, publications, and historical contexts in which approximately thirty-five female editors of newspapers and other periodicals worked in the nineteenth-century West. The book covers the period from 1854, when the West's first woman editor began her work, through the turn of the century; it includes research gathered from thirteen western states. With its in-depth portraits of pioneering women editors and its appendix listing more than two hundred women and the major repositories where their extant publications are kept, Equal to the Occasion rescues from obscurity a whole panoply of nineteenth-century western women.

Sherilyn Cox Bennion received her PhD in Mass Communications from Syracuse University, and currently is professor emeritus of journalism and mass communication at Humboldt State University. In addition to Equal to the Occasion, she has authored numerous articles and book reviews.