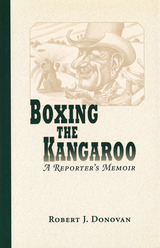 "The host had brought out a pair of boxing gloves and asked the president if any of his friends would like to indulge in the Australian sport of boxing kangaroos. Once the president of the United States had selected me, there was almost no way out, unless I ran home to tell my mother."

In Boxing the Kangaroo: A Reporter's Memoir, Robert J. Donovan shares many exciting events that highlighted his stellar journalistic career. As an investigative reporter during five presidential administrations, Donovan has had many "insider" experiences. His memoir delightfully humanizes each of the five presidents he reported on: Truman, Eisenhower, Kennedy, Johnson, and Nixon.

Donovan began his career working as a night copyboy for the Buffalo Courier-Express, earning seven dollars a week. In 1937, he got a job as a reporter for the New York Herald Tribune, where he worked for many years. By 1942 the Herald Tribune had assigned Donovan to cover City Hall and the lively activities of Fiorello La Guardia. After his service in World War II he returned to the Herald Tribune to cover the man from Missouri who followed FDR. Ultimately, Donovan served as chief of the New York Herald Tribune Washington bureau and the Los Angeles Times Washington bureau.

Donovan traveled across the country with Harry S. Truman during his "Give 'Em Hell, Harry" campaign. He covered Dwight D. Eisenhower's election, about which he says there was never a doubt--Ike, the war hero, mesmerized the country. He was a personal friend of John F. Kennedy, having written about the President's PT-109 heroics in World War II, and was on the scene the day Kennedy was assassinated: "The drama in the second press bus, in which I rode in the presidential motorcade in Dallas, is unforgettable. `Why has the motorcade stopped?' a reporter asked as we drew near the Texas School Book Depository. . . . `I heard a shot,' another said. A voice in the rear contradicted him. `That was a motorcycle backfiring.'" Donovan would find out shortly before the rest of the world that, in fact, it was not a motorcycle backfiring, but the firing of an assassin's bullet that killed the nation's thirty-fifth president.

Boxing the Kangaroo is one of the best "I was there" accounts of American history. This fascinating book will appeal to journalists, American history buffs, and the general reader alike.