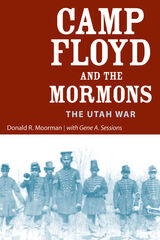 Camp Floyd and the Mormons traces the history of the sojourn of “Johnston’s Army” in Utah Territory from the beginning of the Utah War in 1857 through the abandonment of Camp Floyd in Cedar Valley west of Utah Lake at the outbreak of the Civil War. The book describes the relationship between the invading army and the local Mormon population, gives an account of Indian affairs in Utah, and describes the activities of federal officials in Utah during that volatile period.

Completed posthumously by Gene Sessions, Moorman’s colleague at Weber State University, Camp Floyd and the Mormons is a comprehensive analysis of the history of frontier Utah as a decade of isolation ended and confrontations with the United States government began. Moorman had unprecedented access to materials in the LDS Church Archives on subjects ranging from the Mountain Meadows Massacre to the Mormon responses to the presence of the army in Utah from 1858 through 1861.

First published by the University of Utah Press in 1992, this reprint edition includes a new introduction by Gene Sessions in which he recounts Moorman’s research adventures during the 1960s "in the bowels of the old Church Administration Building, where Joseph Fielding Smith and A. Will Lund watched over the contents of the archives like wide-eyed mother hens."

Gene A. Sessions is a presidential distinguished professor of history at Weber State University. He is the author of numerous books, including Mormon Democrat: The Religious and Political Memoirs of James Henry Moyle.