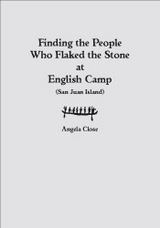 Finding the People who Flaked the Stone at English Camp
by Angela E Close
University of Utah Press, 2006
Cloth: 978-0-87480-850-6
Lithic analysis in North America traditionally has focused on bifacially retouched pieces, or bifaces. Angela Close contends that such an approach has ignored cores and debitage to the detriment of analysis.
At English Camp on San Juan Island, Washington, an earlier excavation (1950) kept the bifaces and discarded everything else, unstudied. Typically, the bifaces themselves have been used as type-fossils, allowing assignment of occupation to a chronological phase but serving little other purpose. North American lithic analysis has seen a move away from this approach and toward other aspects of lithic assemblages, yet the emphasis is still on the genesis of bifaces.
In this volume, Close uses a fine-grained study to critique American approaches to lithic analysis. Her approach is based on chaîne opératoire analysis, which applied here attempts to trace the life-histories of all artifacts in an assemblage from raw material procurement to discard and entry into the archaeological record. This approach is aimed explicitly at the people behind the artifacts.
Close’s final and likely controversial analysis is that women did a great deal of the tool manufacture at this particular site.
AUTHOR BIOGRAPHY
Angela E. Close
TABLE OF CONTENTS