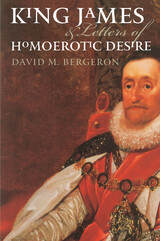 What can we know of the private lives of early British sovereigns? Through the unusually large number of letters that survive from King James VI of Scotland/James I of England (1566-1625), we can know a great deal. Using original letters, primarily from the British Library and the National Library of Scotland, David Bergeron creatively argues that James' correspondence with certain men in his court constitutes a gospel of homoerotic desire. Bergeron grounds his provocative study on an examination of the tradition of letter writing during the Renaissance and draws a connection between homosexual desire and letter writing during that historical period.

King James, commissioner of the Bible translation that bears his name, corresponded with three principal male favorites—Esmé Stuart (Lennox), Robert Carr (Somerset), and George Villiers (Buckingham). Esmé Stuart, James' older French cousin, arrived in Scotland in 1579 and became an intimate adviser and friend to the adolescent king. Though Esmé was eventually forced into exile by Scottish nobles, his letters to James survive, as does James' hauntingly allegorical poem Phoenix. The king's close relationship with Carr began in 1607. James' letters to Carr reveal remarkable outbursts of sexual frustration and passion.

A large collection of letters exchanged between James and Buckingham in the 1620s provides the clearest evidence for James' homoerotic desires. During a protracted separation in 1623, letters between the two raced back and forth. These artful, self-conscious letters explore themes of absence, the pleasure of letters, and a preoccupation with the body. Familial and sexual terms become wonderfully intertwined, as when James greets Buckingham as "my sweet child and wife."

King James and Letters of Homoerotic Desire presents a modern-spelling edition of seventy-five letters exchanged between Buckingham and James. Across the centuries, commentators have condemned the letters as indecent or repulsive. Bergeron argues that on the contrary they reveal an inward desire of king and subject in a mutual exchange of love.