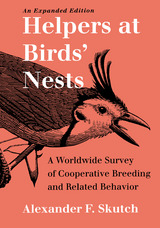 In Helpers at Birds' Nests, renowned naturalist and ornithologist Alexander Skutch provides vivid, detailed accounts of a remarkable aspect of bird behavior—he aid that one bird gives another who is neither its mate nor its dependent young and who may even belong to a different species.

In graceful, clear prose, Skutch makes accessible to amateur bird-watchers examples of cooperation in species as far-flung as the little rifleman of New Zealand, the Laysan albatross in the mid Pacific, and the neotropical birds of Skutch's own Valley of El General in Costa Rica.

Skutch describes the cooperative behavior of more than fifty families of birds. Each family is introduced by a brief sketch of its distribution and outstanding features, followed by intimate, nontechnical accounts of the helpful behaviors that have been most carefully studied. Skutch considers the significance of helpful birds and discusses the theoretical aspects of cooperative breeding, its evolution, kin selection, altruism, and demography.

First discovered by the author more than half a century ago, cooperative breeding has become increasingly studied by professional ornithologists. In this expanded edition, noted behaviorist Stephen Emlen credits Skutch's passionate observations of birds with promoting scientific interest in avian behavior. Emlen offers readers a summary of the advances made in the field during the past ten years and places Skutch's work in the context of contemporary ornithological research.

Alexander F. Skutch has lived in Costa Rica and studied birds in Central and South America for over fifty years. His books  include Life Histories of Central American Birds, Life of the Woodpecker, Birds of Tropical America, and Parent Birds and Their Young.