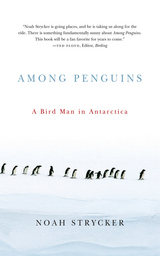 The year he graduated from college, 22-year-old Noah Strycker was dropped by helicopter in a remote Antarctic field camp with two bird scientists and a three months’ supply of frozen food. His subjects: more than a quarter million penguins.

Compact, industrious, and approachable, the Adélie Penguins who call Antarctica home visit their breeding grounds each Antarctic summer to nest and rear their young before returning to sea. Because of long-term studies, scientists may know more about how these penguins will adjust to climate change than about any other creature in the world.

Bird scientists like Noah are less well known. Like the intrepid early explorers of Antarctica, modern scientists drawn to the frozen continent face an utterly inhospitable landscape, one that inspires, isolates, and punishes.

With wit, curiosity, and a deep knowledge of his subject, Strycker recounts the reality of life at the end of the Earth—thousand-year-old penguin mummies, hurricane-force blizzards, and day-to-day existence in below freezing temperatures—and delves deep into a world of science, obsession, and birds.

Among Penguins weaves a captivating tale of penguins and their researchers on the coldest, driest, highest, and windiest continent on Earth. Birders, lovers of the Antarctic, and fans of first-person adventure narratives will be fascinated by Strycker’s book.