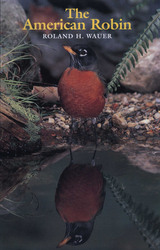 The American Robin is North America's most widespread songbird, with a range extending from Alaska, Canada, and Newfoundland to the highlands of Mexico and Guatemala. Its ruddy red breast and cheerful song have also made it one of our most beloved birds—as American as apple pie, as familiar a harbinger of spring as the first daffodil. Connecticut, Michigan, and Wisconsin have chosen the American Robin as their state bird, while a pair of robins grace the Canadian two dollar bill.

In this book, Roland Wauer offers a complete natural history of the American Robin for a popular audience. Combining his own observations as a field naturalist with data gleaned from the scientific literature, he describes the American Robin from every angle—appearance and biology, distribution, behavior, life cycle, and enemies and threats. In addition, he explores the legends and lore surrounding robins and offers suggestions for attracting them to your yard.

Roland H. Wauer, of Victoria, Texas, is the author of several books on nature.

REVIEWS
An excellent popular natural history of the American Robin....This book is written in a manner that is easy for the average reader to follow, yet it contains enough scientific detail to be useful to professional ornithologists as well.... It will be an important contribution to ornithology and one of the more definitive references on the American Robin.
— Steven Hedges, Wildlife Biologist, U.S. Bureau of Land Management