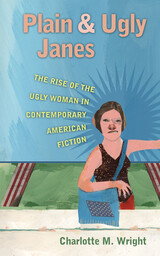 “If beauty is truth, is ugliness falsehood and deception? If all art need concern itself with is beauty, what need have we to explore in our literature the nature and consequences of ugliness?” In Plain and Ugly Janes, originally published in hardcover in 2000 by Garland, Charlotte Wright defines and explores the ramifications of a new character type in twentieth-century American literature, the “ugly woman,” whose roots can be traced to the old maid/spinster character of the nineteenth century.

During the 1970s, stories began to appear in which the ugly woman is a figure of power—heroic not in the traditional old maid's way of quiet, passive acceptance but in a way more in keeping with the active, masculine definition of heroic behavior. Wright uses these stories to discuss the nature and definitions of ugliness and the effects of female ugliness on both male and female literary characters in the works of a range of American authors, including Sherwood Anderson, Russell Banks, Djuna Barnes, Peter S. Beagle, Sarah Bird, Ray Bradbury, Katherine Dunn, Louise Erdrich, William Faulkner, Tess Gallagher, Barry Hannah, Ernest Hemingway, Zora Neale Hurston, Alison Lurie, Lorrie Moore, Joyce Carol Oates, Flannery O'Connor, Katherine Anne Porter, Leon Rooke, Anne Tyler, Alice Walker, and Eudora Welty. Wright concludes that the ugly woman character allows American authors to explore the ironies and inequalities inherent in the beauty system.

"Blessedly void of volatile sexist language and defensiveness that has marred so much of feminist critical theory, this study provides a dimension to the interpretation of American literature that may well bring it to a closer relevancy to American culture. Wright has defined a significant American social totem here."---Clay Reynolds, University of Texas–Dallas