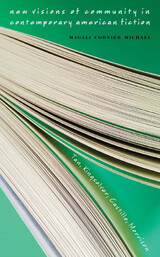 In this engaging, optimistic close reading of five late twentieth-century novels by American women, Magali Cornier Michael illuminates the ways in which their authors engage with ideas of communal activism, common commitment, and social transformation. The fictions she examines imagine coalition building as a means of moving toward new forms of nonhierarchical justice; for ethnic cultures that, as a result of racist attitudes, have not been assimilated, power with each other rather than power over each other is a collective goal.Michael argues that much contemporary American fiction by women offers models of care and nurturing that move away from the private sphere toward the public and political. Specifically, texts by women from such racially marked ethnic groups as African American, Asian American, Native American, and Mexican American draw from the rich systems of thought, histories, and experiences of these hybrid cultures and thus offer feminist and ethical revisions of traditional concepts of community, coalition, subjectivity, and agency.Focusing on Amy Tan’s The Joy Luck Club, Barbara Kingsolver’s The Bean Trees and Pigs in Heaven, Ana Castillo’s So Far from God, and Toni Morrison’s Paradise, Michael shows that each writer emphasizes the positive, liberating effects of kinship and community. These hybrid versions of community, which draw from other-than-dominant culturally specific ideas and histories, have something to offer Americans as the United States moves into an increasingly diverse twenty-first century. Michael provides a rich lens through which to view both contemporary fiction and contemporary life.
AUTHOR BIOGRAPHY
Magali Cornier Michael is associate professor of English and co-director of the Women’s and Gender Studies Program at Duquesne University in Pittsburgh. She is the author of Feminism and the Post-modern Impulse: Post–World War II Fiction as well as articles on such authors as John Fowles, Angela Carter, D. M. Thomas, Doris Lessing, Virginia Woolf, Margaret Atwood, and Toni Morrison.
REVIEWS

“Wonderfully rich and suggestive . . . an important contribution to the study of gender and ethnicity, to community and citizenship, and to contemporary American fiction.”---Nancy J. Peterson, Purdue University

“Compelling and outstanding. . . . I know of no other work that brings to bear on such literature the perspective of coalition building and its importance for the processes of community relations and the inter-connections between individuals and their communities.”---Philip Page, California State University at San Bernardino

“In this nuanced and insightful analysis of ethnic women writers Amy Tan, Barbara Kingsolver, Ana Castillo, and Toni Morrison, Michael argues that traditional American values like rugged individualism, capitalist materialism, and intersecting race, class, ethnic, and gender oppressions isolate, impoverish, and victimize women until they turn to the values of ethnic communities for inspiration.”---Phillipa Kafka, author, On the Outside Looking In(dian): Indian Women Writers at Home and Abroad