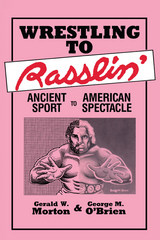 Wrestling to Rasslin’ traces the roots of one of man’s oldest competitive sports. Beginning in sporting bars in the late 1800s and graduating to Barnum sideshow tents, wrestling has thrilled the world over with such early athletes as William Muldoon, George Hackenschmidt, and Tom Jenkins. After World War II and the advent of television, wrestling took a turn toward the dramatic, emphasizing conflicts between good and evil.
AUTHOR BIOGRAPHY
Gerald W. Morton is Distinguished Research Professor of English and Philosophy at Auburn University at Montgomery.  George M. O’Brien is professor emeritus of German and Latin in the Department of Foreign Languages at the University of Minnesota, Duluth.
TABLE OF CONTENTS