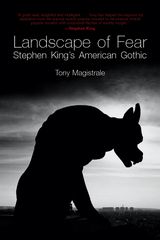 One of the very first books to take Stephen King seriously, Landscape of Fear (originally published in 1988) reveals the source of King's horror in the sociopolitical anxieties of the post-Vietnam, post-Watergate era. In this groundbreaking study, Tony Magistrale shows how King's fiction transcends the escapism typical of its genre to tap into our deepest cultural fears: "that the government we have installed through the democratic process is not only corrupt but actively pursuing our destruction, that our technologies have progressed to the point at which the individual has now become expendable, and that our fundamental social institutions-school, marriage, workplace, and the church-have, beneath their veneers of respectability, evolved into perverse manifestations of narcissism, greed, and violence."
Tracing King's moralist vision to the likes of Twain, Hawthorne, and Melville, Landscape of Fear establishes the place of this popular writer within the grand tradition of American literature. Like his literary forbears, King gives us characters that have the capacity to make ethical choices in an imperfect, often evil world. Yet he inscribes that conflict within unmistakably modern settings. From the industrial nightmare of "Graveyard Shift" to the breakdown of the domestic sphere in The Shining, from the techno-horrors of The Stand to the religious fanaticism and adolescent cruelty depicted in Carrie, Magistrale charts the contours of King's fictional landscape in its first decade.

AUTHOR BIOGRAPHY
Tony Magistrale is professor of English at the University of Vermont.  His many books include Hollywood’s Stephen King, Poe’s Children, and A Dark Night’s Dreaming.
REVIEWS

"In this close, careful, and serious reading of King's fiction, Magistrale shows how and why King must be accepted as more than just another successful popular purveyor of horror."—Frederick S. Frank, Guide to the Gothic

"The best book so far on Stephen King's work as serious social fiction is Tony Magistrale's well-written study, Landscape of Fear. . . . Aggressively digging beneath the surface of King's novels, Magistrale explores major themes, patterns, and motifs in order to identify King's sociopolitical concerns, the subtexts beneath the monsters."—Michael A. Morrison, Horror Literature: A Reader's Guide