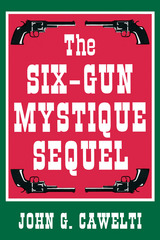 The Six-Gun Mystique Sequel is a revised and considerably expanded edition of The Six-Gun Mystique, a pioneering study of the Western as a popular genre that has been widely influential since its original publication in 1970.
In this expanded version, Cawelti revises his analysis of the structural characteristics of the Western novel and film, synthesizing much of the rich discussion of the Western genre that has appeared since The Six-Gun Mystique's original publication. To this structural analysis he adds a new account of the genre's history and its relationship to the myths of the West that have played such an influential role in American history. The Six-Gun Mystique Sequel concludes with an exploration of the continuing influence of Western themes and symbols on many aspects of postmodern American culture, and an assessment of the critical tradition that has developed around the Western genre. The appendices of the book are also revised and expanded to include useful lists of the most important Western novels and films, as well as the best critical and historical studies of different aspects of the genre.
AUTHOR BIOGRAPHY
John G. Cawelti is a professor of English at the University of Kentucky. He is well known as a pioneering scholar of popular culture.
TABLE OF CONTENTS