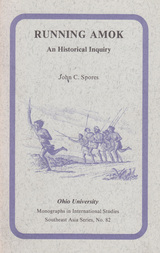 Running Amok: An Historical Inquiry
by John C. Spores
Ohio University Press, 1988
Paper: 978-0-89680-140-0
Amok, one of the few Malay words commonly appearing in English, names a syndrome of unpredictable and indiscriminate homicidal behavior with suicidal intent. In tracing the development of this behavioral pattern, Spores examines historical data, including frequently colorful colonialist accounts of such episodes, from British Malaya and the Netherlands East Indies during the period 1800–1925.

Spores presents a basic etiological distinction between reactive-motivated and a spontaneous, unmotivated amok; the one an intentional act capable of establishing or restoring dignity and self-respect; the other a result of organic disturbance. He also explores the social-psychological dynamics of engagement in the two types of solitary amok and suggests possible behavioral chains. Further, his study demonstrates the impact of social forces and processes of the late nineteenth and early twentieth century which significantly altered factors in traditional Malay society important in generating expressions of solitary amok.

Running amok demonstrates the utility of bringing historical data to bear on the examination of specific social phenomena, particularly suggesting that the understanding of some present-day forms of mental disorder or other aberrant or deviant behavior can be facilitated and enriched through such analysis.