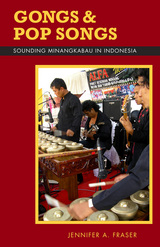 Scholarship on the musical traditions of Indonesia has long focused on practices from Java and Bali, including famed gamelan traditions, at the expense of the wide diversity of other musical forms within the archipelago. Jennifer A. Fraser counters this tendency by exploring a little-known gong tradition from Sumatra called talempong, long associated with people who identify themselves as Minangkabau.

Grounded in rich ethnographic data and supplemented with online audiovisual materials, Gongs and Pop Songs is the first study to chronicle the history and variety of talempong styles. It reveals the continued vitality of older modes in rural communities in the twenty-first century, while tracing the emergence of newer ones with radically different aesthetic frames and values. Each talempong style discussed incorporates into its repertoire Minangkabau pop or indigenous songs, both of which have strong associations with the place and people. These contemporary developments in talempong have taken place against a shifting political, social, and economic backdrop: the institutionalization of indigenous arts, a failed regional rebellion, and the pressures of a free-market economy.

Fraser adopts a cognitive approach to ethnicity, asking how people understand themselves as Minangkabau through talempong and how different styles of the genre help create and articulate ethnic sentiments—that is, how they help people sound Minangkabau.

Jennifer A. Fraser is an associate professor of ethnomusicology and anthropology at Oberlin College.