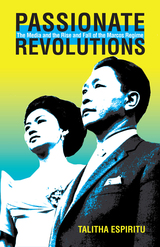 In the last three decades, the dictatorship of Ferdinand Marcos has commanded the close scrutiny of scholars. These studies have focused on the political repression, human rights abuses, debt-driven growth model, and crony capitalism that defined Marcos’ so-called Democratic Revolution in the Philippines. But the relationship between the media and the regime’s public culture remains underexplored.

In Passionate Revolutions, Talitha Espiritu evaluates the role of political emotions in the rise and fall of the Marcos government. Focusing on the sentimental narratives and melodramatic cultural politics of the press and the cinema from 1965 to 1986, she examines how aesthetics and messaging based on heightened feeling helped secure the dictator’s control while also galvanizing the popular struggles that culminated in “people power” and government overthrow in 1986.

Talitha Espiritu teaches in the Film and New Media Studies program at Wheaton College in Norton, Massachusetts. Her work on the Marcos regime has appeared in edited anthologies and in Journal of Narrative Theory and Social Identities.

TABLE OF CONTENTS
Contents
Introduction: The Power of Political Emotions
1: The First Quarter Storm
2: Social Conduct and the New Society
3: National Discipline and the Cinema
4: Popular Struggles and Elite Politics
5: The Media and the Second Coming of the First Quarter Storm
6: The New Politics, Lino Brocka, and People Power
Conclusion: The Force of National Allegory
Abbreviations
Notes
Glossary
Bibliography
Index