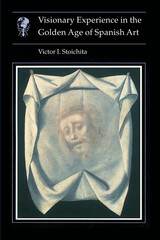 In this original and lucid account of how Spanish painters of the 16th and 17th centuries dealt with mystic visions in their art, and of how they attempted to "represent the unrepresentable", Victor Stoichita aims to establish a theory of visionary imagery in Western art in general, and one for the Spanish Counter-Reformation in particular. He reveals how the spirituality of the Counter-Reformation was characterized by a rediscovery of the role of the imagination in the exercise of faith. This had important consequences for painters such as Velazquez, Zurbaran and El Greco, leading to the development of ingenious solutions for visual depictions of mystical experience. This was to crystallize into an overtly meditative and didactic pictorial language.

That Spanish painting is both cerebral and passionate is due to the particular historical forces which shaped it. Stoichita's account will be of crucial interest not just to scholars of Spanish art but to anyone interested in how art responds to ideological pressures.
AUTHOR BIOGRAPHY
Victor I. Stoichita is Professor of the History of Art at the University of Fribourg, Switzerland. He is author of A Short History of the Shadow (Reaktion, 1997) and co-author of Goya (Reaktion, 1999).
REVIEWS
Reaktion Books have a nice line in curious art history. The topic here is delightful: the relationship between painting and supernatural visions. This is the far side of Counter-Reformation piety with such subjects as the Mystical Lactation of St Bernard.' – The Guardian

' . . . thought-provoking . . . the depiction of visionary experiences was a powerful subject for Counter-Reformation devotion, manifested especially in Spanish Baroque art. Stoichita explores aspects of both form and meaning in Spanish paintings of visions (such as the role of trompe l'oeil, the manipulation of foreshortenings, and even variations in paint strokes), along with analyzing appropriate contemporary writings.' -Choice


Introduction
1. Framing the Beyond: The Quest for a Definition
2. Vision and Meta-language
3. Visions and Paintings
4. The Distant View
5. The Making of a Painting
6. Representations of the Mystical Eros
7. The Seeing Body
By Way of a Conclusion
References
Bibliography
List of Illustrations