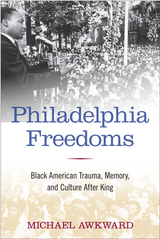 Michael Awkward’s Philadelphia Freedoms captures the energetic contestations over the meanings of racial politics and black identity during the post-King era in the City of Brotherly Love. Looking closely at four cultural moments, he shows how racial trauma and his native city’s history have been entwined. He introduces each of these moments with poignant personal memories of the decade in focus and explores representation of African American freedom and oppression from the 1960s to the 1990s.

Awkward closes his examination of racial trauma and black identity with a discussion of candidate Barack Obama’s speech on race at Philadelphia’s Constitution Center, pointing to the conflict between the nation’s ideals and the racial animus that persists even into the second term of America’s first black president.
AUTHOR BIOGRAPHY
Michael Awkward,Gayl A. Jones Professor of Afro-American Literature and Culture at the University of Michigan, is the author, most recently, of Burying Don Imus and Soul Covers.
TABLE OF CONTENTS


Preface
Acknowledgments
Introduction: Keeping the Past in Lively Memory after King: The Traumatic Implications of Black American Oppression
1 “Philadelphia Did Not Burn”: Quelling Riots and Deferring Hoop Dreams in the Age of the Militant Black Athlete
2 Haunted Longings: Nostalgic Black Musical Formulations of Masculinity and the Patriarchal Family
3 A “Genuinely Afro-American Narrative”: Sarah Phillips and the Politics of Black Textual Authenticity
4 Screening the (Beloved) Novel: On Oprah Winfrey and the Protocols of Adaptation
Conclusion: No Longer at Home?
Notes
References
Index