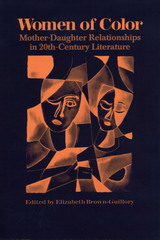 Prominent among the writers considered here are Toni Morrison, Alice Walker, Maxine Hong Kingston, Cherrie Moraga, Leslie Marmon Silko, and Amy Tan. Elizabeth Brown-Guillory and the other essayists examine the myths and reality surrounding the mother-daughter relationship in these writers' works. They show how women writers of color often portray the mother-daughter dyad as a love/hate relationship, in which the mother painstakingly tries to convey knowledge of how to survive in a racist, sexist, and classist world while the daughter rejects her mother's experiences as invalid in changing social times.

This book represents a further opening of the literary canon to twentieth-century women of color. Like the writings it surveys, it celebrates the joys of breaking silence and moving toward reconciliation and growth.

AUTHOR BIOGRAPHY
Elizabeth Brown-Guillory is a playwright and Associate Professor of English at the University of Houston.
REVIEWS
There is no other study that I know of which considers mother-daughter relationships in the literatures of such diverse non-European cultures.
— Violet H. Bryan, Associate Professor of English, Xavier University of Louisiana