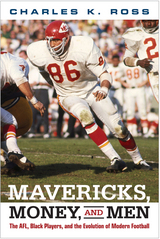 The American Football League, established in 1960, was innovative both in its commitment to finding talented, overlooked players—particularly those who played for historically black colleges and universities—and in the decision by team owners to share television revenues.

In Mavericks, Money and Men, football historian Charles Ross chronicles the AFL’s key events,  including Buck Buchanan becoming the first overall draft pick in 1963, and the 1965 boycott led by black players who refused to play in the AFL-All Star game after experiencing blatant racism. He also recounts how the success of the AFL forced a merger with the NFL in 1969, which arguably facilitated the evolution of modern professional football.

Ross shows how the league, originally created as a challenge to the dominance of the NFL, pressured for and ultimately accelerated the racial integration of pro football and also allowed the sport to adapt to how African Americans were themselves changing the game.

Epilogue: The State of the Game II