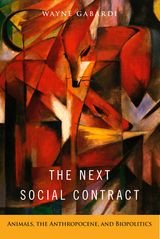 In his provocative book The Next Social Contract, Wayne Gabardi rigorously considers the fate of animals in the twenty-first century. He claims that if we are to address the challenges raised by the Anthropocene—the period where nonhuman beings tend to be mere extras, often subsumed under the umbrella notion of “nature”—we need to radically rethink our basic ethical outlook and develop a new, “more-than-human” social contract.

Gabardi’s wide-ranging and multidisciplinary analysis focuses on four principal battlegrounds of animal biopolitics in the twenty first century: the extinction of wild animals, the crisis of oceanic animals, industrialized farm animals and the future of industrial agribusiness, and the situation of contact-zone animals moving into human-occupied habitats.

In his recasting of the social contract, Gabardi envisions a culture shift in human-animal relations toward posthumanism that features the ethical and political prioritization of animal life so it is on par with that of human well-being.

Wayne Gabardi is Professor of Political Theory and Honors Program Faculty at Idaho State University. He is the author of Negotiating Postmodernism.

TABLE OF CONTENTS
Contents
Introduction • The Argument and Structure of the Book
1. The Anthropocene Hypothesis
2. The Plight of Animals in the Twenty-First Century
3. Posthumanist Ethics
4. The Next Social Contract
Conclusion • Animals, the Anthropocene, and Biopolitics: A Labor of Sisyphus
Notes
Bibliography
Index
REQUEST ACCESSIBLE FILE