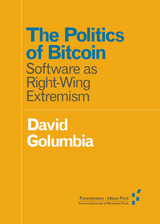 Since its introduction in 2009, Bitcoin has been widely promoted as a digital currency that will revolutionize everything from online commerce to the nation-state. Yet supporters of Bitcoin and its blockchain technology subscribe to a form of cyberlibertarianism that depends to a surprising extent on far-right political thought. The Politics of Bitcoin exposes how much of the economic and political thought on which this cryptocurrency is based emerges from ideas that travel the gamut, from Milton Friedman, F.A. Hayek, and Ludwig von Mises to Federal Reserve conspiracy theorists.

David Golumbia teaches in the English department and the Media, Art, and Text PhD program at Virginia Commonwealth University.