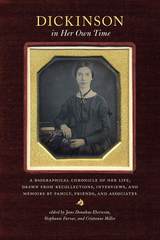 Dickinson in Her Own Time: A Biographical Chronicle of Her Life, Drawn from Recollections, Interviews, and Memoirs by Family, Friends, and Associates
edited by Jane Donahue Eberwein, Stephanie Farrar and Cristanne Miller
University of Iowa Press, 2015
Paper: 978-1-60938-391-6
eISBN: 978-1-60938-392-3

Even before the first books of her poems were published in the 1890s, friends, neighbors, and even apparently strangers knew Emily Dickinson was a writer of remarkable verses. Featuring both well-known documents and material printed or collected here for the first time, this book offers a broad range of writings that convey impressions of Dickinson in her own time and for the first decades following the publication of her poems. It all begins with her school days and continues to the centennial of her birth in 1930.

In addition, promotional items, reviews, and correspondence relating to early publications are included, as well as some later documents that reveal the changing assessments of Dickinson’s poetry in response to evolving critical standards. These documents provide evidence that counters many popular conceptions of her life and reception, such as the belief that the writer best known for poems focused on loss, death, and immortality was herself a morose soul. In fact, those who knew her found her humorous, playful, and interested in other people.

Dickinson maintained literary and personal correspondence with major representatives of the national literary scene, developing a reputation as a remarkable writer even as she maintained extreme levels of privacy. Evidence compiled here also demonstrates that she herself made considerable provision for the survival of her poems and laid the groundwork for their eventual publication. Dickinson in Her Own Time reveals the poet as her contemporaries knew her, before her legend took hold.
AUTHOR BIOGRAPHY
Jane Donahue Eberwein of Birmingham, Michigan, is distinguished professor of English, emerita, at Oakland University. She is the author of Dickinson: Strategies of Limitation and editor of An Emily Dickinson Encyclopedia and Reading Emily Dickinson’s Letters: Critical Essays.

Stephanie Farrar is assistant professor of English at the University of Wisconsin-Eau Claire, where she is working on a monograph titled “Maternity, Masculinity, and the Rhetoric of Rights in American Civil War Poetry.” She makes her home in Eau Claire, Wisconsin.