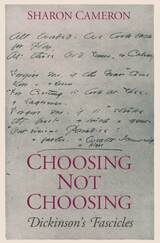 Although Emily Dickinson copied and bound her poems into manuscript notebooks, in the century since her death her poems have been read as single lyrics with little or no regard for the context she created for them in her fascicles. Choosing Not Choosing is the first book-length consideration of the poems in their manuscript context. Sharon Cameron demonstrates that to read the poems with attention to their placement in the fascicles is to observe scenes and subjects unfolding between and among poems rather than to think of them as isolated riddles, enigmatic in both syntax and reference. Thus Choosing Not Choosing illustrates that the contextual sense of Dickinson is not the canonical sense of Dickinson.

Considering the poems in the context of the fascicles, Cameron argues that an essential refusal of choice pervades all aspects of Dickinson's poetry. Because Dickinson never chose whether she wanted her poems read as single lyrics or in sequence (nor is it clear where any fascicle text ends, or even how, in context, a poem is bounded), "not choosing" is a textual issue; it is also a formal issue because Dickinson refused to chose among poetic variants; it is a thematic issue; and, finally, it is a philosophical one, since what is produced by "not choosing" is a radical indifference to difference. Extending the readings of Dickinson offered in her earlier book Lyric Time, Cameron continues to enlarge our understanding of the work of this singular American poet.
AUTHOR BIOGRAPHY
Sharon Cameron is Kenan Professor of English at The Johns Hopkins University.
TABLE OF CONTENTS