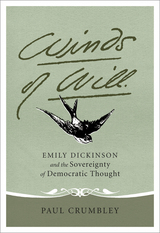 In this study, Paul Crumbley asserts that, contrary to popular opinion, Emily Dickinson consistently communicated political views through her poetry. Dickinson’s life of self-isolation—today her most notable personal characteristic—by no means extended into the political sphere, he argues. While she rarely addressed political issues directly and was curiously disengaged from the liberal causes and female reform movements of her time, Dickinson’s poems are deeply rooted both in matters of personal sovereignty and reader choice. The significant choices Dickinson extends to the reader underscore the democratic dimensions of reading her work, and of reading itself as a political act.
Crumbley employs close readings of Dickinson’s poems and letters, highlighting the many changing—and often contradictory—voices in her work, both throughout her oeuvre and in individual poems themselves. In Dickinson’s letters Crumbley finds just as many unique and conflicting voices; thus, both her personal correspondence and the poems make political demands by placing the burden of interpretation on the reader.
Rather than reflecting explicit political values, Dickinson’s work chronicles an ongoing decision-making process that magnifies the role of individual choice, not the advocacy of specific outcomes. In the end, Dickinson’s readers must either accept an isolated lyric subjectivity or invest that subjectivity with the substance necessary for engagement with the larger world.

AUTHOR BIOGRAPHY
Paul Crumbley is a professor of English at Utah State University, the author of Inflections of the Pen: Dash and Voice in Emily Dickinson, and coeditor of Body My House: May Swenson’s Work and Life and Search for a Common Language: Environmental Writing and Education.