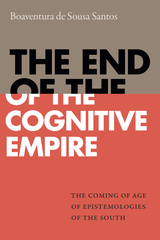 In The End of the Cognitive Empire Boaventura de Sousa Santos further develops his concept of the "epistemologies of the South," in which he outlines a theoretical, methodological, and pedagogical framework for challenging the dominance of Eurocentric thought. As a collection of knowledges born of and anchored in the experiences of marginalized peoples who actively resist capitalism, colonialism, and patriarchy, epistemologies of the South represent those forms of knowledge that are generally discredited, erased, and ignored by dominant cultures of the global North. Noting the declining efficacy of established social and political solutions to combat inequality and discrimination, Santos suggests that global justice can only come about through an epistemological shift that guarantees cognitive justice. Such a shift would create new, alternative strategies for political mobilization and activism and give oppressed social groups the means through which to represent the world as their own and in their own terms.
AUTHOR BIOGRAPHY
Boaventura de Sousa Santos is Emeritus Professor of Sociology at the University of Coimbra (Portugal), Distinguished Legal Scholar at the University of Wisconsin-Madison, and the author and editor of dozens of books, which include If God Were a Human Rights Activist and Epistemologies of the South: Justice against Epistemicide.
REVIEWS


Preface  vii
Introduction: Why the Epistemologies of the South? Artisanal Paths for Artisanal Futures  1
Part I. Postabyssal Epistemologies
1. Pathways toward the Epistemologies of the South  19
2. Preparing the Ground  37
3. Authorship, Writing, and Orality  53
4. What Is Struggle? What Is Experience?  63
5. Bodies, Knowledges, and Corazonar  87
Part II. Postabyssal Methodologies
6. Cognitive Decolonization: An Introduction  107
7. On Nonextractivist Methodologies  143
8. The Deep Experience of the Senses  165
9. Demonumentalizing Written and Archival Knowledge  185
Part III. Postabyssal Pedagogies
10. Gandhi, an Archivist of the Future  209
11. Pedagogy of the Oppressed, Participatory Action Research, and Epistemologies of the South  247
12. From University to Pluriversity to Subversity  269
Conclusion: Between Fear and Hope  293
Notes  303
References  337
Index  365