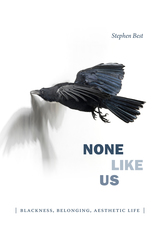 It passes for an unassailable truth that the slave past provides an explanatory prism for understanding the black political present. In None Like Us Stephen Best reappraises what he calls “melancholy historicism”—a kind of crime scene investigation in which the forensic imagination is directed toward the recovery of a “we” at the point of “our” violent origin. Best argues that there is and can be no “we” following from such a time and place, that black identity is constituted in and through negation, taking inspiration from David Walker’s prayer that “none like us may ever live again until time shall be no more.” Best draws out the connections between a sense of impossible black sociality and strains of negativity that have operated under the sign of queer. In None Like Us the art of El Anatsui and Mark Bradford, the literature of Toni Morrison and Gwendolyn Brooks, even rumors in the archive, evidence an apocalyptic aesthetics, or self-eclipse, which opens the circuits between past and present and thus charts a queer future for black study.
AUTHOR BIOGRAPHY
Stephen Best is Associate Professor of English at the University of California, Berkeley, and author of The Fugitive's Properties: Law and the Poetics of Possession.
REVIEWS
-- Kris Cohen Public Books