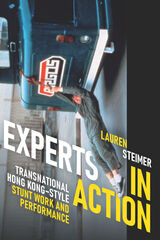 Action movie stars ranging from Jackie Chan to lesser-known stunt women and men like Zoë Bell and Chad Stahelski stun their audiences with virtuosic martial arts displays, physical prowess, and complex fight sequences. Their performance styles originate from action movies that emerged in the industrial environment of 1980s Hong Kong. In Experts in Action Lauren Steimer examines how Hong Kong--influenced cinema aesthetics and stunt techniques have been taken up, imitated, and reinvented in other locations and production contexts in Hollywood, New Zealand, and Thailand. Foregrounding the transnational circulation of Hong Kong--influenced films, television shows, stars, choreographers, and stunt workers, she shows how stunt workers like Chan, Bell, and others combine techniques from martial arts, dance, Peking opera, and the history of movie and television stunting practices to create embodied performances that are both spectacular and, sometimes, rendered invisible. By describing the training, skills, and labor involved in stunt work as well as the location-dependent material conditions and regulations that impact it, Steimer illuminates the expertise of the workers whose labor is indispensable to some of the world's most popular movies.
AUTHOR BIOGRAPHY
Lauren Steimer is Associate Professor of Film and Media Studies and Media Arts at the University of South Carolina.
REVIEWS
“Experts in Action is a rich, painstakingly researched work on the evolutions of global stunt acting as a mode of performance. It beautifully shifts conversations about expertise into the realms of fandom, without relinquishing the rigor of its mixed methods engaging production history, performance studies, and transnational media theory. There's nothing at all like it in other accounts of Hong Kong cinema, and its consideration of the craft of stunt techniques is matched by the craft and meticulousness of Lauren Steimer's prose.”

“With high ambition and conceptual creativity, Experts in Action is the first book on stunt work that takes its topic from the specialist margins of cinema and media studies and lobs it right at the heart of broad critical debate about transnationalism in culture. A breakthrough achievement.”