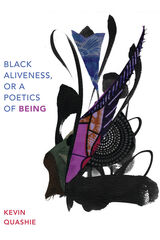 In Black Aliveness, or A Poetics of Being, Kevin Quashie imagines a Black world in which one encounters Black being as it is rather than only as it exists in the shadow of anti-Black violence. As such, he makes a case for Black aliveness even in the face of the persistence of death in Black life and Black study. Centrally, Quashie theorizes aliveness through the aesthetics of poetry, reading poetic inhabitance in Black feminist literary texts by Lucille Clifton, Audre Lorde, June Jordan, Toni Morrison, and Evie Shockley, among others, showing how their philosophical and creative thinking constitutes worldmaking. This worldmaking conceptualizes Blackness as capacious, relational beyond the normative terms of recognition—Blackness as a condition of oneness. Reading for poetic aliveness, then, becomes a means of exploring Black being rather than nonbeing and animates the ethical question “how to be.” In this way, Quashie offers a Black feminist philosophy of being, which is nothing less than a philosophy of the becoming of the Black world.
AUTHOR BIOGRAPHY
Kevin Quashie is Professor of English at Brown University and the author of The Sovereignty of Quiet: Beyond Resistance in Black Culture and Black Women, Identity, and Cultural Theory: (Un)Becoming the Subject.
REVIEWS
“Black studies is a spiritual discipline, one devoted to that dispersed and disseminated gathering of a nonexclusionary black world. Kevin Quashie has helped me think about this and has given me intellectual and theoretical tools and language for this. Black Aliveness is one of the most intellectually stimulating, illuminating, and spiritually moving books I’ve read in a very long time. Its impact will be immediate.”

“Decentering the focus on ‘social death’ in current black studies, Black Aliveness is the first book to push us to the next step when we start with the feeling of aliveness rather than with black death as a way of understanding black life. There is magical thinking and writing in this paradigm-shifting book.”