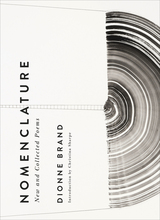 Spanning almost four decades, Dionne Brand’s poetry has given rise to whole new grammars and vocabularies. With a profound alertness that is attuned to this world and open to some other, possibly future, time and place, Brand’s ongoing labors of witness and imagination speak directly to where and how we live and reach beyond those worlds, their enclosures, and their violences.

Nomenclature: New and Collected Poems begins with a new long poem, the titular Nomenclature for the Time Being, in which Dionne Brand’s diaspora consciousness dismantles our quotidian disasters. In addition to this searing new work, Nomenclature collects eight volumes of Brand’s poetry published between 1982 and 2010 and includes a critical introduction by the literary scholar and theorist Christina Sharpe.

Nomenclature: New and Collected Poems features the searching and centering cantos of Primitive Offensive; the sharp musical conversations of Winter Epigrams and Epigrams to Ernesto Cardenal in Defense of Claudia; and the documentary losses of revolutions in Chronicles of the Hostile Sun, in which “The street was empty/with all of us standing there.” No Language Is Neutral reads language, coloniality, and sexuality as a nexus. Land to Light On writes intimacies and disaffections with nation, while in thirsty a cold-eyed flâneur surveys the workings of the city. In Inventory, written during the Gulf Wars, the poet is “the wars’ last and late night witness,” her job is not to soothe but to “revise and revise this bristling list/hourly.” Ossuaries’ futurist speaker rounds out the collection and threads multiple temporal worlds—past, present, and future.

This masterwork displays Dionne Brand’s ongoing body of thought—trenchant, lyrical, absonant, discordant, and meaning-making. Nomenclature: New and Collected Poems is classic and living, a record of one of the great writers of our age.

AUTHOR BIOGRAPHY
Dionne Brand is the author of numerous volumes of fiction, poetry, and nonfiction. Her latest poetry collection, The Blue Clerk, also published by Duke University Press, was shortlisted for the Griffin Poetry Prize and won the Trillium Book Award. Her other poetry collections have won the Griffin Poetry Prize, the Governor General’s Literary Award, the Trillium Book Award, and the Pat Lowther Memorial Award. Brand’s novel, Theory, won the 2019 OCM Bocas Prize for Fiction and the Toronto Book Award, and What We All Long For won the Toronto Book Award. Her works of nonfiction include Bread Out of Stone and A Map to the Door of No Return: Notes to Belonging. From 2009 to 2012 Brand served as Toronto’s Poet Laureate. In 2021 Brand was awarded a Windham-Campbell Prize in Fiction. She lives in Toronto.

Christina Sharpe is Professor and Canada Research Chair in Black Studies in the Humanities at York University and author of In the Wake: On Blackness and Being, also published by Duke University Press.
REVIEWS
"Through her storytelling and activism, Brand has always found ways to respond to and reflect the times. One thread remains clear in her work: Her commitment to Toronto is her commitment to people, histories, stories and the expressions of this place and beyond. The city might try to cling to the poet and all of her magnificence, but Dionne Brand is still imagining better worlds."