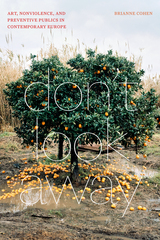 Don't Look Away: Art, Nonviolence, and Preventive Publics in Contemporary Europe
by Brianne Cohen
Duke University Press, 2023
Paper: 978-1-4780-1946-6
Cloth: 978-1-4780-1681-6
eISBN: 978-1-4780-2408-8
In Don’t Look Away Brianne Cohen considers the role of contemporary art in developing a public commitment to ending structural violence in Europe. Cohen focuses on art activism after the turn of the twenty-first century that confronts the slow violence perpetuated against precarious peoples. Exploring the work of German filmmaker Harun Farocki, Swiss artist Thomas Hirschhorn, and the art collective Henry VIII’s Wives, Cohen argues that their recursive art practices offer a more sustained counter to the violence undergirding the public sphere than do artworks premised on immediate rupture. Their art reflects on a variety of flashpoints of violence and vulnerability in Europe, from the legacy of the Holocaust to Islamophobia and rising anti-immigrant sentiment. Because this violence has often cultivated fear-based publics, Cohen contends that art must foster ethical and civic relations between strangers across physical and virtual borders. In contrast to art-critical practices that privilege direct action in contemporary art activism, Cohen advocates for the imaginative, messier, often more elusive potential of art in changing mindsets and fostering a nonviolent social imaginary.
AUTHOR BIOGRAPHY
Brianne Cohen is Assistant Professor of Art and Art History at the University of Colorado Boulder and coeditor of The Photofilmic: Entangled Images in Contemporary Art and Visual Culture.