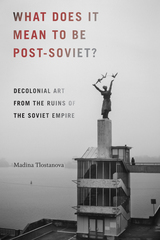 In What Does It Mean to Be Post-Soviet? Madina Tlostanova traces how contemporary post-Soviet art mediates this human condition. Observing how the concept of the happy future—which was at the core of the project of Soviet modernity—has lapsed from the post-Soviet imagination, Tlostanova shows how the possible way out of such a sense of futurelessness lies in the engagement with activist art. She interviews artists, art collectives, and writers such as Estonian artist Liina Siib, Uzbek artist Vyacheslav Akhunov, and Azerbaijani writer Afanassy Mamedov who frame the post-Soviet condition through the experience and expression of community, space, temporality, gender, and negotiating the demands of the state and the market. In foregrounding the unfolding aesthesis and activism in the post-Soviet space, Tlostanova emphasizes the important role that decolonial art plays in providing the foundation upon which to build new modes of thought and a decolonial future.
AUTHOR BIOGRAPHY
Madina Tlostanova is Professor of Postcolonial Feminisms at Linköping University, Sweden, and the author of several books, most recently, Postcolonialism and Postsocialism in Fiction and Art: Resistance and Re-existence.
REVIEWS
-- Melanie E. Emerson ARLIS/NA Reviews


Acknowledgments  vii
Introduction. A Futureless Ontology?  1
1. The Decolonial Sublime   25
2. Decolonial Aesthesis and Post-Soviet Art  33
3. A Woman Who Has Many Selves and Takes Over Many Spaces: A Conversation with Liina Siib   65
4. Beyond Dependencies: A Talk with Vyacheslav Akhunov, the Lonely Ranger of Uzbeck Contemporary Art  84
5. Reflecting on Time, Space, and Memory with Afanassy Mamedov  106
Conclusion. People Are Silent . . .  119
Notes  129
References  135
Index  141