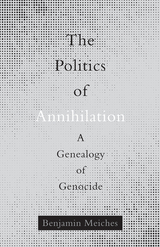 How did a powerful concept in international justice evolve into an inequitable response to mass suffering?

For a term coined just seventy-five years ago, genocide has become a remarkably potent idea. But has it transformed from a truly novel vision for international justice into a conservative, even inaccessible term? The Politics of Annihilation traces how the concept of genocide came to acquire such significance on the global political stage. In doing so, it reveals how the concept has been politically contested and refashioned over time. It explores how these shifts implicitly impact what forms of mass violence are considered genocide and what forms are not.

Benjamin Meiches argues that the limited conception of genocide, often rigidly understood as mass killing rooted in ethno-religious identity, has created legal and political institutions that do not adequately respond to the diversity of mass violence. In his insistence on the concept’s complexity, he does not undermine the need for clear condemnations of such violence. But neither does he allow genocide to become a static or timeless notion. Meiches argues that the discourse on genocide has implicitly excluded many forms of violence from popular attention including cases ranging from contemporary Botswana and the Democratic Republic of Congo, to the legacies of colonial politics in Haiti, Canada, and elsewhere, to the effects of climate change on small island nations.

By mapping the multiplicity of forces that entangle the concept in larger assemblages of power, The Politics of Annihilation gives us a new understanding of how the language of genocide impacts contemporary political life, especially as a means of protesting the social conditions that produce mass violence.

Benjamin Meiches is assistant professor of security studies and conflict resolution at the University of Washington–Tacoma.

Contents
Introduction: Genocide as Political Discourse
Part I. The Concept and Its Powers
1. Groups, Paradoxes of Identity, and the Racialization of Global Politics
2. Parts, Wholes, and the Erasure of Indigenous Life
3. Destruction and the Creativity of Violence
4. Desire, International Law, and the Problem of Unintentional Genocide
Part II. The Politics of Genocide
5. The Logistics of Prevention and the Fantasy of Preemption
6. Genocide as Politics and the Horror of Plasticity
7. The Sense of Genocide and the Politics of the Future
Acknowledgments
Notes
Index