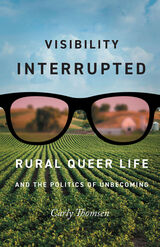 Today most LGBTQ rights supporters take for granted the virtue of being “out, loud, and proud.” Most also assume that it would be terrible to be LGBTQ in a rural place. By considering moments in which queerness and rurality come into contact, Visibility Interrupted argues that both positions are wrong. In the first monograph on LGBTQ women in the rural Midwest, Carly Thomsen deconstructs the image of the rural as a flat, homogenous, and anachronistic place where LGBTQ people necessarily suffer. And she suggests that visibility is not liberation and will not lead to liberation.

Far from being an unambiguous good, argues Thomsen, visibility politics can, in fact, preclude collective action. They also advance metronormativity, postraciality, and capitalism. To make these interventions, Thomsen develops the theory of unbecoming: interrogating the relationship between that which we celebrate and that which we find disdainful—the past, the rural, politics—is crucial for developing alternative subjectivities and politics. Unbecoming precedes becoming. Drawing from critical race studies, disability studies, and queer Marxism, in addition to feminist and queer studies, the insights of this book will be useful to scholars theorizing issues far beyond sexuality and place and to social justice activists who want to move beyond visibility.

Carly Thomsen is assistant professor of gender, sexuality, and feminist studies at Middlebury College. She directed and produced In Plain Sight, a documentary short that extends the arguments of this book.

1. Metronormativity as Legacy: The Cases of Matthew Shepard and Jene Newsome

5. The More Things Change, the More They Stay the Same: Metronormativity on the Move

6. What’s the Use? Queer Critique in Motion