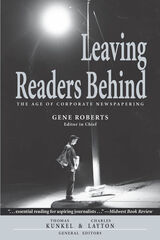 The American newspaper industry is in the middle of the most momentous change in its entire three hundred-year history. A generation of relentless "corporatization" has resulted in a furious, unprecedented blitz of buying, selling, and consolidation of newspapers —affecting the mightiest dailies and the humblest weeklies. Accompanying this corporate jury has come dramatic—and drastic—change in reporting and coverage of all kinds. Concerned that this phenomenon was going largely unreported—and, therefore, unquestioned—Gene Roberts, legendary reporter and editor, decided to undertake a huge, extended reportorial study of his own industry. Gathering more than two dozen distinguished journalists and writers, Roberts produced a long series of reports in the American Journalism Review, published by the University of Maryland's Philip Merrill College of Journalism. This is the first of two books to be published exploring the current state of American newspaper and it asks the crucial question: Are American communities—in the very middle of the so-called Information Explosion—in danger of becoming less informed than ever?
AUTHOR BIOGRAPHY
Gene Roberts has a long and distinguished career as reporter and editor including stints at the Goldsboro (N.C.) News-Argus and the Detroit Free Press. He was the managing editor of the New York Times and executive editor of the Philadelphia Inquirer. During his eighteen years at the Inquirer, the paper won seventeen Pulitzer Prizes. He now teaches in the Philip Merrill College of Journalism, where he was the editor in chief of the Project on the State of the American Newspaper. Thomas Kunkel is dean of the Philip Merrill College of Journalism, having succeeded to that post after three years as editor and director of the Project on the State of the American Newspaper. In addition to a long career in the newspaper business, he is the author of Genius in Disguise: Harold Ross of the New Yorker (Carrol & Graf, 1996) and Enormous Prayers: A Journey into the Priesthood (Westview, 1999). Charles Layton is a freelance writer and book editor. He spent twenty years working as a news and feature editor at the Philadelphia Inquirer and has covered government and politics in both Louisiana and Delaware as a wire service and newspaper reporter. He edited several pieces in the Project on the State of the American Newspaper and is the author or co-author of two pieces. He lives in Ocean Grove, New Jersey
REVIEWS
“Gene Roberts (an immensely respected newspaper reporter and editor) has provided the reader with a unique and documented history that is as engaging as it is informative. Leaving Readers Behind is essential reading for aspiring journalists and students of American newspaper publishing.” —Midwest Book Review