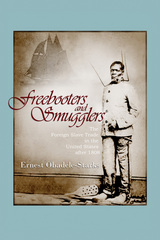 In 1891 a young W. E. B. DuBois addressed the annual American Historical Association on the enforcement of slave trade laws: “Northern greed joined to Southern credulity was a combination calculated to circumvent any law, human or divine.” One law in particular he was referring to was the Abolition Act of 1808. It was specifically passed to end the foreign slave trade. However, as Ernest Obadele-Starks shows, thanks to profiteering smugglers like the Lafitte brothers and the Bowie brothers, the slave trade persisted throughout the south for a number of years after the law was passed. Freebooters and Smugglers examines the tactics and strategies that the adherents of the foreign slave trade used to challenge the law. It reassesses the role that Americans played in the continuation of foreign slave transshipments into the country right up to the Civil War, shedding light on an important topic that has been largely overlooked in the historiography of the slave trade.
AUTHOR BIOGRAPHY
Ernest Obadele-Starks holds a joint appointment as an associate professor of history at Texas A&M University-College Station and Texas A&M University at Qatar. He is the author of Black Unionism in the Industrial South and has written several articles examining various political and social aspects of the African American diaspora. He is currently working on a comparative study of free black settlements in Canada, the United States, and Mexico from 1849 to 1867.
TABLE OF CONTENTS