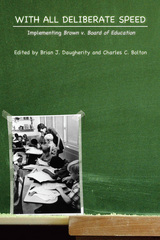 This is the first effort to provide a broad assessment of how well the Brown v. Board of Education decision that declared an end to segregated schools in the United States was implemented. Written by a distinguished group of historians, the twelve essays in this collection examine how African Americans and their supporters in twelve states—Arkansas, North Carolina, Virginia, South Carolina, Georgia, Mississippi, Florida, Delaware, Missouri, Indiana, Nevada, and Wisconsin—dealt with the Court’s mandate to desegregate “with all deliberate speed.” The process followed many diverse paths. Some of the common themes in these efforts were the importance of black activism, especially the crucial role played by the NAACP; entrenched white opposition to school integration, which wasn’t just a southern state issue, as is shown in Delaware, Wisconsin, and Indiana; and the role of the federal government, a sometimes inconstant and sometimes reluctant source of support for implementing Brown.
AUTHOR BIOGRAPHY
Brian J. Daugherity is an instructor and assistant to the chair in the Department of History at Virginia Commonwealth University.
TABLE OF CONTENTS