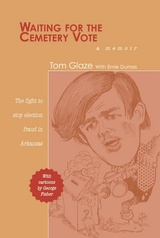 Waiting for the Cemetery Vote begins with an overview chapter of Arkansas election fraud since the nineteenth century and then moves on to more specific examples of fraudulent activities over a dozen or so years that coincide with the onset of the modern progressive era in Arkansas. Author Tom Glaze, who was a trial lawyer battling election fraud during this time, is the ideal chronicler for this topic, bringing a memoirist's intimate insight together with a wealth of historical knowledge. Glaze describes the manipulation of absentee ballots and poll-tax receipts; votes cast by the dead, children, and animals; forgeries of ballots from nursing homes; and threats to body or livelihood made to anyone who would dare question these activities or monitor elections. Deceptive practices used to control election results were disturbingly brazen in the gubernatorial elections in the 1960s and were especially egregious in Conway and Searcy Counties in the 1970s and in special elections for the state senate in Faulkner, Conway, and Van Buren Counties. A clean-election movement began in the early 1970s, led not by party or political leaders but by individual citizens. These vigilant and courageous Arkansans undertook to do what their public institutions persistently failed to: insure that elections for public office were honest and that the will of the people was scrupulously obliged. Prominent and colorful among these groups was a small band of women in Conway County who dubbed themselves the "Snoop Sisters" and took on the long-established corrupt machine of Sheriff Marlin Hawkins. Written with longtime Arkansas political writer Ernie Dumas and illustrated with cartoons from the inimitable George Fisher, Waiting for the Cemetery Vote will be an entertaining and informative read for any Arkansas history and politics buffs.
AUTHOR BIOGRAPHY
Tom Glaze was a member of the Arkansas bar for forty-four years, the first twelve as a trial lawyer battling vote fraud and the last twenty-two as an associate justice of the Arkansas Supreme Court.
TABLE OF CONTENTS
Contents
Preface
Acknowledgments
1. The Simple Expedient of Theft
2. The Boys of Summer
3. Absentee Democracy
4. Throw the Rascals Out
5. Petition Parties
6. Crime and Impunity
7. Snoop Sisters
8. Court Jesters
9. Independence Day
10. A Penny for Your Vote
11. Judicial Remedy
Epilogue
Index
REQUEST ACCESSIBLE FILE