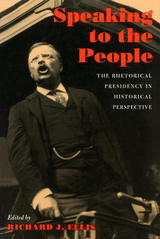 Speaking to the People: The Rhetorical Presidency in Historical Perspective
edited by Richard Ellis
University of Massachusetts Press, 1998
Paper: 978-1-55849-159-5
Americans today expect their president to speak directly to them on the issues of the day—to address their concerns, to ask for their support, even to feel their pain. Yet, as the essays in this volume make clear, this was not always the case. During the early years of the republic, such behavior would have been deemed beneath the president's office, undignified at best, demagogic at worst. How, then, did the practice of "speaking to the people" evolve from the icy reserve of George Washington to the effusive empathy of Bill Clinton? This book explores how the "rhetorical presidency" became a central feature of American politics. Beginning with a fresh look at the framing of the Constitution, the essays examine the role of rhetoric in a variety of nineteenth-century presidencies, as well as in the crucial turn-of-the-century presidencies of William McKinley, Theodore Roosevelt, and Woodrow Wilson. Viewed against this historical backdrop, the "modern" presidencies of Franklin Roosevelt and his successors appear less a break with the past than a culmination of developments in popular leadership and rhetorical practice that began more than a century before.
AUTHOR BIOGRAPHY
Richard J.Ellis is associate professor of politics at Willamette University and author of The Dark Side of the Left: Illiberal Egalitarianism in America and American Political Cultures.