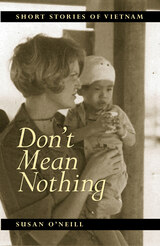 Don't Mean Nothing: Short Stories of Vietnam
by Susan O'Neill
University of Massachusetts Press, 2004
Paper: 978-1-55849-442-8
In this powerful story collection—the first such work of fiction by a woman who served in Vietnam—Susan O'Neill offers a remarkable view of the war from a female perspective. All the nurses who served there had a common bond: to attend to the wounded. While men were sent to protect America's interests at any cost, nurses were trained to save the lives of anyone—soldier or citizen, ally or enemy—who was brought through the hospital doors. It was an important distinction in a place where killing was sometimes the only objective. And since they were so vastly outnumbered, women inevitably became objects of both reverence and sexual desire.

For American nurses in Vietnam, and the men among whom they worked and lived, a common defense against the steady onslaught of dead and dying, wounded and maimed, was a feigned indifference—the irony of the powerless. With the assistance of alcohol, drugs, and casual sex, "Don't mean nothing" became their mantra, a means of coping with the other war—the war against total mental breakdown.

Each or these tales offers new and profound insight into the ways the war in Vietnam forever changed the lives of everyone who served there.
AUTHOR BIOGRAPHY
Susan O'Neill served as an Army nurse in Vietnam from 1969 to 1970. Don't Mean Nothing is her first book, written nearly thirty years after the experiences it depicts.