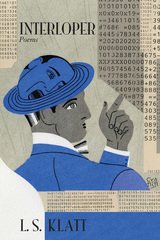 In the United States, where much of the daily discourse appears to be reduced to matters of dollars and cents, the poet is an interloper who traffics where he doesn’t belong. L. S. Klatt is vividly aware of this phenomenon. For him, words are musical and versatile, more about play than utility, and he seeks to dislocate language, to freelance and maneuver, to alter common sense on the way to new sense. The poems in Interloper unsettle frontiers between disparate worlds so that the imagination is given room to roam: pears become guitars, racks of ribs are presented as steamboats, and helicopters transmute into diesel seraphs. The poetry aspires acrobatically in the manner of prayers and pilots, but adventure throughout the book is viewed as precarious and the will to conquest leads to apocalypse and ruin. The interloper wanders through crime scenes and crash sites as he glosses the landscape—at home and not at home with the America of yesterday and tomorrow. In symbols that scat and ricochet, the interloper scores a new song, one that composes—and decomposes—on the page.
AUTHOR BIOGRAPHY
L. S. Klatt teaches in the English Department at Calvin College. His poems have been published in many literary magazines, including the Colorado Review, Boston Review, New Orleans Review, and Verse