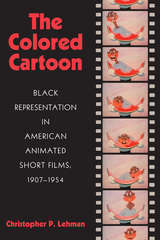 From the introduction of animated film in the early 1900s to the 1950s, ethnic humor was a staple of American-made cartoons. Yet as Christopher Lehman shows in this revealing study, the depiction of African Americans in particular became so inextricably linked to the cartoon medium as to influence its evolution through those five decades. He argues that what is in many ways most distinctive about American animation reflects white animators' visual interpretations of African American cultural expression.

The first American animators drew on popular black representations, many of which were caricatures rooted in the culture of southern slavery. During the 1920s, the advent of the sound-synchronized cartoon inspired animators to blend antebellum-era black stereotypes with the modern black cultural expressions of jazz musicians and Hollywood actors. When the film industry set out to desexualize movies through the imposition of the Hays Code in the early 1930s, it regulated the portrayal of African Americans largely by segregating black characters from others, especially white females. At the same time, animators found new ways to exploit the popularity of African American culture by creating animal characters like Bugs Bunny who exhibited characteristics associated with African Americans without being identifiably black.

By the 1950s, protests from civil rights activists and the growing popularity of white cartoon characters led animators away from much of the black representation on which they had built the medium. Even so, animated films today continue to portray African American characters and culture, and not necessarily in a favorable light.

Drawing on a wide range of sources, including interviews with former animators, archived scripts for cartoons, and the films themselves, Lehman illustrates the intimate and unmistakable connection between African Americans and animation.Choice
AUTHOR BIOGRAPHY
Christopher P. Lehman is associate professor of ethnic studies at Saint Cloud State University and author of American Animated Cartoons of the Vietnam Era