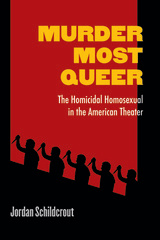 The “villainous homosexual” has long stalked America’s cultural imagination, most explicitly in the figure of the queer murderer, a character in dozens of plays. But as society’s understanding of homosexuality has changed, so has the significance of these controversial characters, especially when employed by LGBT theater artists themselves to explore darker fears and desires. Murder Most Queer examines the shifting meanings of murderous LGBT characters in American theater over a century, showing how these representations wrestle with and ultimately subvert notions of gay villainy.


Murder Most Queer works to expose the forces that create the homophobic paradigm that imagines sexual and gender nonconformity as dangerous and destructive and to show how theater artists—and for the most part LGBT theater artists—have rewritten and radically altered the significance of the homicidal homosexual. Jordan Schildcrout argues that these figures, far from being simple reiterations of a homophobic archetype, are complex and challenging characters who enact trenchant fantasies of empowerment, replacing the shame and stigma of the abject with the defiance and freedom of the outlaw, giving voice to rage and resistance.  These bold characters also probe the darker anxieties and fears that can affect queer lives and relationships.  Instead of sentencing them to the prison of negative representations, this book analyzes the meanings in their acts of murder, confronting the real fears and desires condensed in those dramatic acts.
AUTHOR BIOGRAPHY
Jordan Schildcrout is Assistant Professor of Theatre and Performance at Purchase College, State University of New York.
TABLE OF CONTENTS
Contents
Introduction: Beyond Queer Villainy
Chapter One: “I Killed Him Because I Loved Him”
Chapter Two: Queer Justice
Chapter Three: The Closet Is a Deathtrap
Chapter Four: Rage and Revelry
Chapter Five: Arias of Love and Death
Chapter Six: Queer Evil
Chapter Seven: Serial Killers
Afterword
Appendix: Plays with Homicidal Homosexuals
Notes
Bibliography
Index
REQUEST ACCESSIBLE FILE