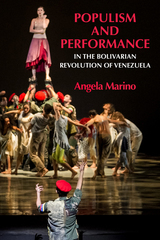 Populism and Performance in the Bolivarian Revolution of Venezuela explains how supporters of the emergent socialism of Hugo Chávez negotiated terms of national belonging and participatory democracy through performance. By foregrounding populism as an embodied act, Angela Marino draws attention to repertoires of populism that contributed to what is arguably the most significant social movement in the Americas since the Cuban Revolution.

Based on ethnographic and archival research, Marino focuses on performances of the devil figure, tracing this beloved trickster through religious fiestas, mid-century theater and film, and other media as it both antagonizes and unifies a movement against dictatorship and neoliberalism. She then demonstrates that performance became a vehicle through which cultural producers negotiated boundaries of inclusion and exclusion in ways that overcame the simplistic logic of good versus evil, us versus them. The result is a nuanced insight into the process of building political mobilization out of crisis and through monumental times of change.

The book will interest readers of Latin American politics, cultural studies, political science, and performance studies by providing a vital record of the revolution, with valuable insights into its internal dynamics and lessons towards building a populist movement of the left in contentious times.
AUTHOR BIOGRAPHY
ANGELA MARINO is an assistant professor in the Department of Theater, Dance, and Performance Studies at the University of California, Berkeley.
TABLE OF CONTENTS
Contents
Illustrations
Acknowledgments
Introduction
Chapter 1. Corpus Christi Devils and the Performance of Populism
Chapter 2. Fiesta Politics in the Making of the Urban Barrio
Chapter 3. Florentino and the Devil: Campaign Populism as Performance
Chapter 4. The Symbol Keeps Performing: Three Populist Turns of the Horse of Bolívar
Conclusion
Notes
Bibliography
Index
REQUEST ACCESSIBLE FILE