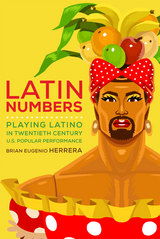 Latin Numbers is a work of performance history, examining the way in which Latino actors on the twentieth-century stage and screen communicated and influenced American ideas about race and ethnicity. Brian Eugenio Herrera looks at how these performances and performers contributed to American popular understanding of Latinos as a distinct racial and ethnic group. His book tracks the conspicuously “Latin” musical number; the casting of Latino actors; the history of West Side Story; how Latina/o performers confront stereotypes; and the proliferation of the gay Latino character in the AIDS era. With a flair for storytelling and a unique ability to see the deeper meanings embedded in popular culture, Herrera creates a history that will appeal to popular culture enthusiasts, theater aficionados, and those interested in the cultural history of Latinos. The book will also delight readers interested in the memorable (and many of the lesser-known) Latino performances on stage and screen.
AUTHOR BIOGRAPHY
Brian Eugenio Herrera is Assistant Professor of Theater at the Lewis Center for the Arts at Princeton University.