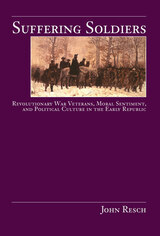 BUY
Suffering Soldiers: Revolutionary War Veterans, Moral Sentiment, and Political Culture in the Early Republic
by John Resch
University of Massachusetts Press, 2009
Paper: 978-1-55849-788-7
This book examines how the moral sentiment of gratitude, as expressed in the image of the suffering soldier, transformed the memory of the Revolutionary War, political culture, and public policy in the early American republic. This popular depiction removed the stigma of vice and treason from the Continental Army, legitimized the army as a republican institution, and credited it with securing independence. By glorifying the now aged, impoverished, and infirm Continental soldiers as republican warriors, the image also accentuated the nation's guilt for its ingratitude toward the veterans. Using Peterborough, New Hampshire, as a case study, John P. Resch shows that the power of the suffering soldier image lay partly in its reflection of reality. The citizen-soldiers from Peterborough who fought in the Continental Army did indeed represent a cross-section of the town, and they experienced greater postwar deprivation and alienation than their peers who had not gone to war. Personal and political sympathy toward the veterans eventually led to the passage of the Revolutionary War Pension Act in 1818. The War Department further validated the soldiers' claims and public gratitude through its liberal administration of the pension program, which attracted more than 20,000 applications.
AUTHOR BIOGRAPHY
John P. Resch is professor of history at the University of New Hampshire, Manchester.